This is written from the comfort of Slettnes fyr, where we plan to stay for two nights. Currently there is a yellow warning for rain for tomorrow, and the forecast is that there will also be strong winds.

Having seen this forecast yesterday we made a dedicated effort to get here. Over the 22 hrs from 1700 yesterday till 1500 today we covered 71 km.

We got a late start yesterday since Stein was arriving from Oslo. It could have been even later since Stein had not pre-booked his ride from Tana bru to Kongsfjord.

However, Stein’s friend Ole was again sporty and drove Stein back to Kongsfjord on short notice. As he also kindly picked Stein up as he left Kongsfjord, he’s becoming a regular around there. If not for his help, we would not have made it here within the weather window.

So we were ready and eager to go at 1700. Turid, Dag and most of their guests were not around, but we decided to go. A fast start would help avoid bad weather we hoped. Smart but not smart enough it would turn out.

It started with no wind and the sun finally burning off the fog in Kongsfjord, true summer’s paddling, no dry suit required. 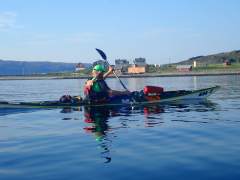 After about an hour the weather changed, gone was the sun and we were paddling into strong headwinds in thick fog.

We made it to Storsteinnes, and took a break and checked the weather. 10 m/s headwinds, but only for about five kilometers. We decided to put on the drysuits and give it a go. Otherwise we might get stuck on that side of Tanafjorden.

It went OK, and as we came past Kjølnes fyr the wind was down as forecast. 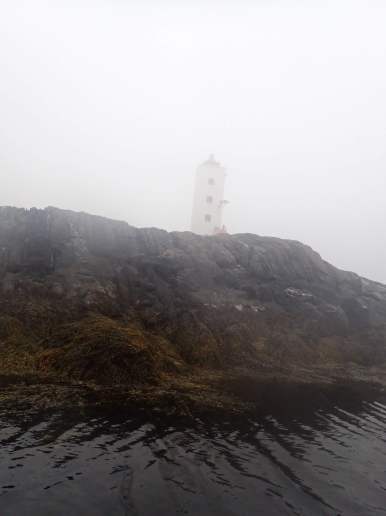 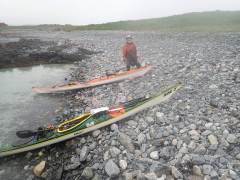 The thick fog remained though and we approached the entrance to Berlevåg harbor with caution. Wise. As we approached we heard a strong signal out of the fog. We waited until the spooky contours of Hurtigruten appeared and entered the harbor. 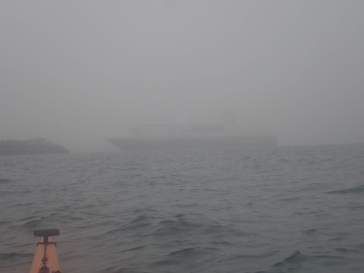 We continued for another hour and a half till Russehavna. We had planned a short break and then to cross Tanafjorden, but it was almost midnight, the visibility was poor and we were tired. We pitched the tent and set the alarm for 0600. 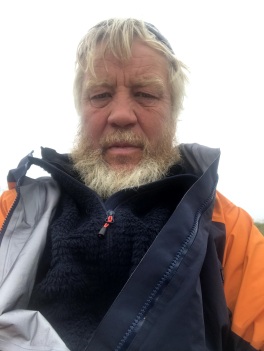 We were on the water again at 0710, and set course for Omgang. It took us about three hours. Three hours of boring crossing. Good conditions and we could see the other side of the fjord before we lost sight of the side we were leaving.

At Omgang we undressed, literally poured sweat out of the dry suits, put on dry clothes and made dinner. 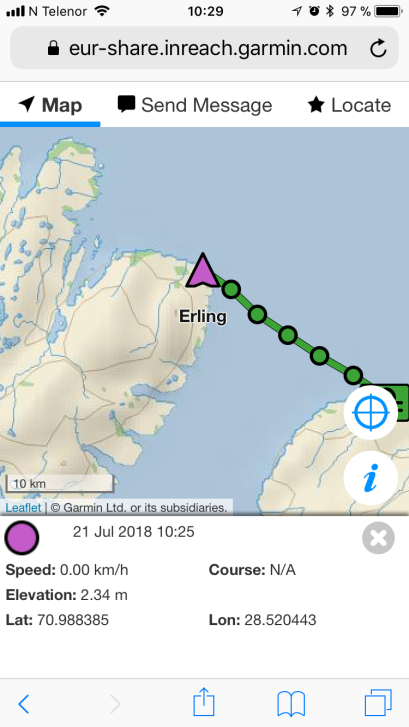 We took time to look around a little, but not much remained of a once sizeable community, infamous for its witch hunts.

We saw no witches nor anyone else, but suddenly the fog thickened and we decided we should not put off putting on our wet stuff anymore.

We were off shortly before 1300 and paddled about one and a half our without seeing anything but fog. GPS  and compass kept us on course, once land appeared we kept going directly to Slettnes Fyr, we passed Gamvik but saw nothing. 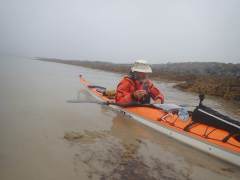 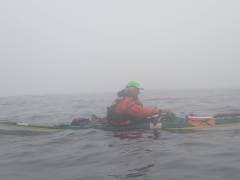 We caught some attention as we walked into the cafe, but people up here are not prickly so it was of the positive kind.

We enquired about the opening time of the shop in Gamvik. Closed at 1300 when we were still at Omgang…

We had dreamt of steak and bernaise… AND NOT IN WAIN!

Tone and Ronald (living in Jessheim) were there with family members from up here. They told us not to worry, they would drive to Meham and shop for us, a fifty kilometer return trip, did we have a list?

We made one, and a long one, as we are hoping two friends from OKK, Einar and Inge will join us here. They come from the west heading toward Grense Jakobselv.

Thanks a lot to Tone and Ronald for taking the trouble!

Dinner is not ready yet, but we have had waffels and coffee served by Fran and Anna in the Cafe.

In spite of 71 km paddled it is doubtful if we will run a calorie deficit these days. 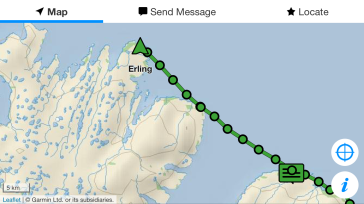 It is good to be on the way again. And when sad circumstances forced a break, Erling would like to underline, that staying in the Kongsfjord area was the right place at the perfect time, and with Sture and his family and Dag and Turid and their friends hospitality and generosity was in ample supply. THANKS!