We got up at 0900, after having talked into the night yesterday. We had coffee with Chris and Oleg, then we packed the boats alongside Silvertärnan. Not so easy in 5 m/s winds. But not a big problem either, we should just paddle 5 km so it was OK to pack the “left overs” on deck and stuff some into the cockpit.

As we were preparing our border guard friends from yesterday came again. This time it was about us. They want us to report our position every day. So that is what we will do, coverage permitting, hopefully.

Then at about 1100, we started for lock 19, and went through without any issues.

Next we sailed with Silvertärnan to an abandoned and derelict fishing harbor, but with a quay alongside which Silvertärnan could moor. 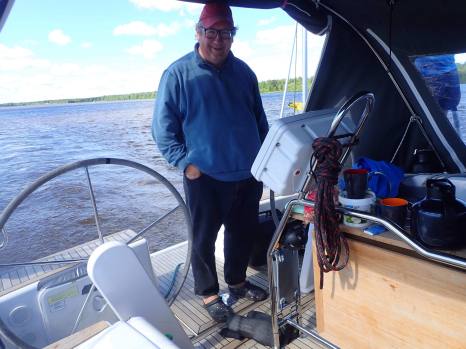 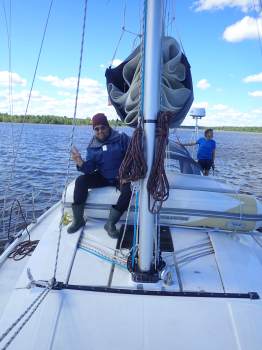 Chris again took command of the kitchen. Whether it was a late breakfast or an early lunch, it was the last time we had the luxury of eating at Silvertärnan.

We took our time, but not too long, Silvertärnan was bound for Solovetskij and planned to get there this evening.

So we bid good bye to our friends Chris and Oleg and paddled off toward a shorside cabin resort called “Starchina”, very conveniently located for kayakers.

We used the good weather to do some boat maintenance, and then set out to do some shopping in town. 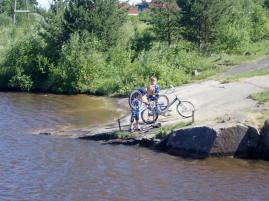 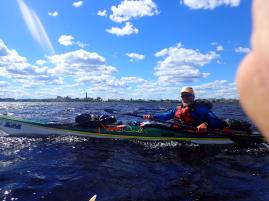 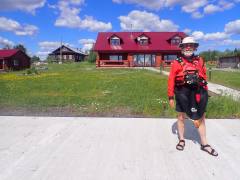 But just as we came to town at about 1700 the shops started to close and the one Cafe we found as well.

The problem was a power outage, so nothing could be cooked and nothing paid as the teller machines did not work either.

We tried a short walk to the railway station, hoping that would be some kind of a (electrified) center.

Not so. Just the a small station building and a very long Murmansk bound train calling.

It was a bit surprising, we have been paddling along the railway line for some days, and generally what appeared to be the best maintained and central parts of villages along the line is in the vicinity of the railway Station.

We kept walking and crossed the river Vyg. There things ran normally, either the electricity had come back or the other bank of Vyg has more stable supply.

We had dinner at the same place as yesterday, with a number of the same guests, strengthening our impression that the dining options in Belomorsk are limited.

We will stay two nights.

Weather forecast says we cannot paddle to Solovetskij before Sunday, so better wait here than on some tiny island in the White Sea without cell phone coverage to keep FSB at ease.

Also it is OK to have some small breathing space between the chapters of our “adventure”. And since we have progressed quicker through the interior waterway than our (conservative) plan, we have time to spare.