A long day with good progress. Some key “points of resistance” passed during the night. Details to follow.

We have great respect for Lopphavet, not least Nuvsodden and Bergsfjord. When we looked over in direction Nuvsodden Tuesday morning we saw nothing but white crested waves.

A quick touch base with our friends from Rogaland revealed that this was the first time in 15 years they had been here that they had taken two consecutive wait-on-weather days.

However, the forecast for the evening was better. We decided to prepare to give it a try if the forecast held up. Preparing meant a packing our stuff, taking a nap and eating a solid entrecôte dinner in preparation for a nights paddle.

At about 1630 our friends from Rogaland decided to try to haul their lines. The wind was falling and we decided to go out and see what we could do, at least getting to Bergsfjord looked doable.

One problem. It was low tide, which meant we had quite a distance to carry our gear and the boats. Except that is not a problem when Stian is the host. He helped us carry the boats and drove our gear to the launch site.

1815 we were on the water and five hours later we finally paused at Holmsundet at the NW end of Sandalsfjord. We had passed Nuvsodden with no wind, but as we paddled in Bergsfjord the “wind tunnel” effect we had speculated in appeared and we got some tail winds and following seas. Once we turned around the southern tip of Silda it was all calm again. We paddled NW with the setting sun low against us and the fjord to ourselves. An almost magic moment. 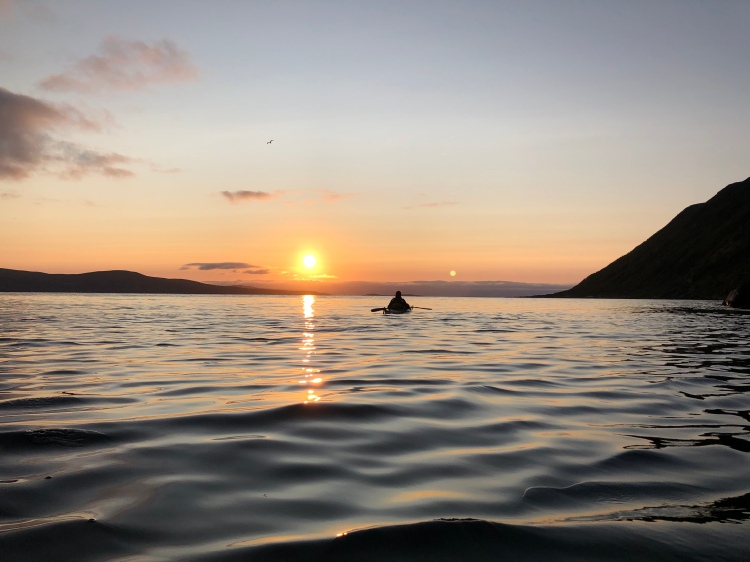 Once we had paused at Holmsund we decided to try for a bay 8 km before Andsnes or even Andsnes itself.

In the end conditions were good with following swell and we made such good progress we went for Andsnes. Also to be closer to take advantage of any good weather window to cross Kjøvangen next day.

We arrived Andsnes at 0400, not expecting to meet anyone. Fortunately, one man greeted us at the beach and we could ask if it was OK to pitch our tents for a night. No problem. Not so fortunately he was out to walk his sick dog.

We did a quick check that the dog hadn’t been sick on our chosen tent place. Negative. We set a record in tent pitching, was in bed by 0500 and set the alarm for 1000 to be ready for favorable weather and currents the next day.