Day 145. 24th of July. Do Norway have the worlds best emergency service?

We believe so! At 0810, the morning of 24th, we decided we had to activate our emergency plan. In Sandfjorden there is no VHF or Cellphone coverage. However, in our emergency plan we also have a Garmin Inreach, a combined GPS, Tracker and Iridium (satellite) text communication device.

When the need occurred for a hasty medical evacuation (MEDEVAC) we send the SOS signal to the InReach Emergency Operation Central (InReach OPS) in USA. In addition, we also send the message for immediate MEDEVAC to our expedition doctor (Øyvind), our head of safety (Morten) and our editor of the blog (Karianne). They received the message at 0815, and noticed it approximately 15 minutes later. The InReach OPS contacted the Joint Rescue Coordination Centre North Norway at 0840, and at 0845 both Morten and Karianne were contacted by the InReach OPS in order to confirm the MEDEVAC. The InReach OPS responded immediately and texted back to Stein for confirmation and further details. Between 0840 and 0855, the Norwegian Rescue Service was alarmed by the InReach OPS, our Doctor and Head of Safety, at the same time. The “113” Emergency phone was alarmed at 0903, and tasked the ambulance helicopter from RNoAF 330 Sqn at Bandak, Lakselv. The ambulance helicopter left Banak at 0909, and arrived at our site 0950.

Only minutes before the helicopter landed, the rescue vessel RS Peter Henry Von Koss from the Norwegian Society for Sea Rescue (RS) had arrived at the shore.  The RS vessel rescue operation had been activated by a text MAYDAY from our InReach.

The emergency team immediately took care of Erling, and they decided an evacuation to Tromsø hospital. We were flown to Mehamn Airport, where a King Air Ambulance Team from Lufttransport FW arrived from Kirkenes, and flew us to Tromsø. 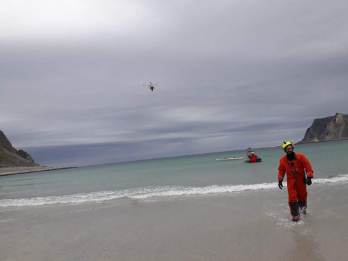 Erling was given the necessary treatment by the hospital Intensive Care team, and are, as this is written, sleeping. We believe we will be able to continue our way south in a couple of days, weather permitting.