We found Skorvan empty, but Helsinki paddlers are a hardy bunch.

At 0100 Pävi arrived at the hut, after a solo night paddle from Helsinki. Since Stein was sound asleep in front of the huts door, we were woken up.

We were at least as surprised as her. Pävi thought about firing up the sauna, but settled for warming up the main room instead. We got up and got to hang our wet clothes in there. Back to bed at about 0145. Then we slept soundly and overslept by an hour… 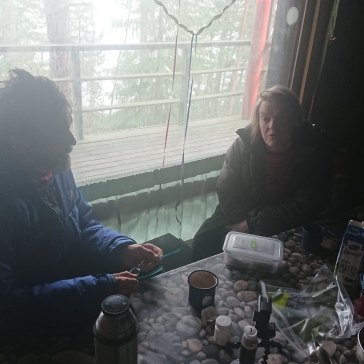 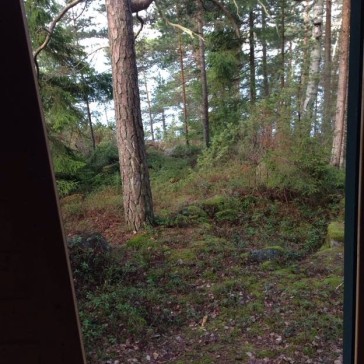 We cooked breakfast and after some time Pävi joined us. She’s a music teacher in Helsinki and eager paddler. She explained to us about Skorvan and the kayak club.

As we discussed our trip, she asked if there is a similar system for paddling the Norwegian coast as the Swedish “blue band” and the Finnish “blue and white band”. Both badges to be earned if one paddles every meter of the coast of the two countries. When we answered no, and that even if it were such a system we would not put emphasis on it, she answered approvingly with words we will remember “Good. We build so many prisons for ourselves”.

We had a late start at 1100, and as we parted Pävi advised us about a restaurant at Svinön about half way to Helsinki where we could stop for lunch. And so we did. A conversation got going with Nisse Lindblom at the next table. Nisse took an interest in our project. He could also explain about the area we were in and how it had become parceled out for summer cabins early/mid last century. Even more interesting was the story behind the bigger mansions we had seen: All built with smugglers money during the prohibition.

We couldn’t delay any more and after about another hour and a half’s paddling we landed at Drumsö paddling club.

We got out of our wet gear and enjoyed the comfort of dry clothes before Björn Silfverberg, President in the club, showed up to wish us welcome. Soon followed by Mikko and his two daughters Åsa and Saga. We even got our own key to the club. An excellent welcome, and something Esikko had put in motion. 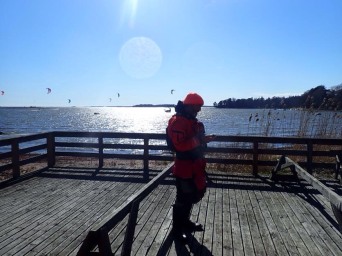 We’ll start tomorrow with Esikko driving us to a 1200 square meters kayak shop. Finally we’ll get to meet our busy helper.