Yesterday evening Kees and Ann Charlotte invited us, Lars, Gro and Gro’s daughter Andrea to restaurant Ljunggren, were some of us had our second dinner (according to plan). Very nice evening with good food, good company and meandering conversations.

This morning Gro had already left when we got up, but Enrique was around and treated us to omelet, coffee, Spanish ham and juice as we enjoyed another long and meandering conversation.

Then there was no pardon: Off to the kayaks in Anders’s garden. It took some time to pack. New items had arrived and an equal amount by weight and volume had left. It was 1300 when we entered Hammarbyslussen for probably the last time.

We had tailwind, and following current. We were making good speed as a boat came up alongside us. It was Anders and his colleagues from “Sjöredningstjänesten” that bid us good onward journey. 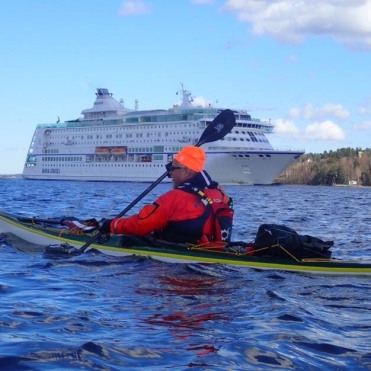 And so far so good. We made it past 30 km in spite of the late start. About 1830 we found what looked like a nice place to land and camp.

As we got onshore we were met by Susann, Mats and Pårsan (a small schnauzer). They even lit us a small fire as it was getting chilly. Most welcome!

It is a nice campsite, with a view to the main shipping fairway out of Stockholm to the north. Every fifteen minutes a huge ferry passes by, but at the relatively low speed they sail at, the waves are no problem.

Tomorrow we will aim for Kapellskär. We might take a ferry to Nådendal and go south from there, rather than risk a lot of waiting on weather as we try to make our way through Åland.